The sacred meaning of house carving of the Russian North

Woodcarving had special meaning for our ancestors

One of the most notable elements in the wooden house of the Russian North is woodcarving. Carved design that covers some ancient houses almost entirely are highly appreciated by the connoisseurs of Russian architecture and common people.

People of our age may not know that carved decorations of wooden houses are not just beautiful embellishments. For person of the past these ornaments had special sacred meaning as they were ancient pagan symbols. Some of them were used to protect the houses, while the other were meant to tell the history of our ancestors. One more goal was to demonstrate the understanding of the world. There are few people nowadays who understand the language of these mysterious ancient symbols even among the specialists with some narrow specialization: ethnographers, restorers, archaeologists. The artifacts of the 17-18th centuries tell a lot, while in the 19th century the masters based their works on aesthetic principles and didn’t try to put some meaning into their works – they just copied the ancient patterns unconsciously.

Actually the world of house carving is full of meaning. Arcs and semiarcs symbolize rainbow. Slavic people took it as a bridge that connected a heaven and an earth. It was important for the owner of the house to have this symbol on the carving, because our ancestors thought that life of the person and his wellbeing depended upon the agreement between the earth and the heaven. 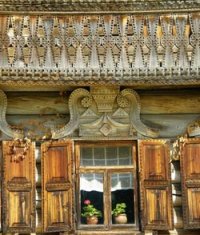 Carving was frequently applied to window openings. And though one can think that this location is conditioned with aesthetic features, this is not so. People decorated windows before with a special purpose. They wished to protect the houses because window connected the house with the surrounding and with the next world as well. In this way, symbolic craving that features special symbols were talismans, which protected the house from evil spirits and the evil eye.

The main defenders from evil forces were solar symbols – they were round, and wheels with different number of spokes were symbols of the sun. The wheel with six spokes was meant to protect the house from the lighting as it was the symbol of thunder. This symbols was most often used on bargeboards (boards, that masked the ends of horizontal timbers or tie beams).

Rhombs and squares were the symbols of earth, the value of which is hard to assess for people who lived in villages. Mother-earth was present in mythological images of Berehynia, Zhitnaya baba, Rozhanica, deity Mokosh. The floral ornaments and images of animals were the most frequent motives of the Russian North. Besides, mysterious bird Sirin that originated from books was popular among people of the Arkhangelsk province.

If you are going to use the elements of ancient Russian house carving for decoration of your dwelling you can learn more about the meaning that were implied in ornaments you want to use.It is always pleasant to know that ancient pagan deityor the powers of nature protect your house.